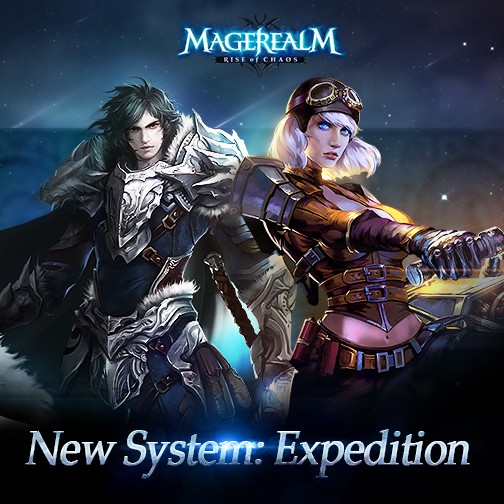 Magerealmis ready to unveil a new game mode to its players! Introducing Expedition, a new feature that lets players use their collection of Heroes to conquer stages and earch valuable resources!

The new Expedition system allows players to send their non-active Heroes to battle through various Expedition stages and earn great rewards. Players place 5 Heroes in a Party and then send them out to do battle. The hero party will fight on their own through increasingly difficult stages. After every 5 stages, there is a Boss stage. Defeating the Boss stage will grant special badges (used in the Expedition shop).

The hero party has an HP bar, which is calculated based their total Hero BR, Rapport, and Rating. Challenging a stage will cost a specific amount of HP. Once the party’s HP is depleted, it will no longer be able to challenge stages. Players also have a second hero party. If the first party is wiped out, the second party will continue the Expedition. Heroes can die during Expedition stages and players can choose to revive their dead heroes or let the remaining heroes continue battling until the entire team is wiped out.

Expedition will feature a weekly ranking system. Players on a server will be ranked by their progress and performance in Expedition. The ranking list will only show the top 50 players, and players can see their current rank and badge rewards. The Top 3 players on a server at the end of each week’s ranking period will earn an exclusive time-limted title. Rankings are reset every Monday at 5AM.

Can your heroes make it on their own without your help? Now you can put them to the ultimate test in Expedition and earn great rewards!

Magerealm_Casirae - The Angel of June