Magerealm, the hit 3D action MMORPG from GTArcade, is bringing out a new Hero! Introducing Elder Shaman, a spirit caller of the primal elements that wields powerful abilities to support his allies!

Elder Shaman hails from the Orc tribes of the Western Plains. This enigmatic figure was once warchief of the most powerful tribe of Orcs, and considered the most gifted shaman of his race. His mastery over the ancient spirits and primal elements gives him great strength and wisdom. However, when the forces of Darkness suddenly swept through his lands, he and his people were ill prepared to resist. He alone survived the onslaught. Seeking revenge for his people, Elder Shaman has come to join the fight! 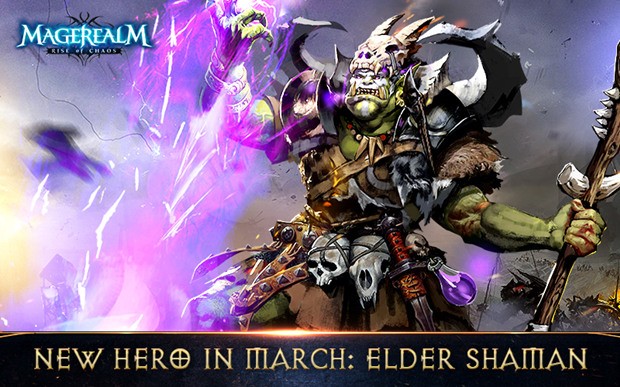 By channeling the ancient spirits and elements, Elder Shaman is able to wield a variety of skills to support his team. Ancestral Heal is his main heal ability. It restores a significant amount of HP to an ally while also reducing the damage they take for a short duration. Soothing Rain is Elder Shaman’s AOE heal that affects all allies and improves their defense, making it great against enemies that use AOE attacks.

Perhaps Elder Shaman’s most notable ability is Call of the Wild, a skill that summons 2 Lightning Wolves to fight by his side. These wolves bite with the impact of a lightning strike, giving them a chance to stun enemies with each attack. Lightning wolves are last a set duration and are immune to damage, so players need not worry about them during battle.

Magerealm_Taurus - Warden of the Angels