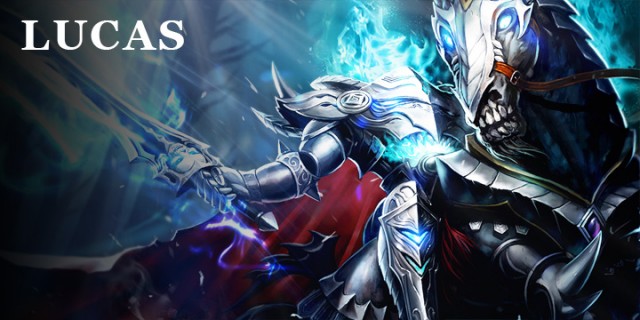 Lucas was the son of Freeman the 1st and Prince of the Freeman Kingdom.

As the largest Human Kingdom at the time, King Freeman held much sway over the world and as a result, Lucas looked up to his father. Freeman's bravery, mercy and justice left an early mark on Lucas.

But this all changed when Freeman was corrupted by Hades's“Eternal Crown”. The father he knew ceased to exist. Instead a greedy, cruel man  with a twisted soul took charge. Despite Lucas's counseling, Freeman turned on his own people with harsh treatments. As Freeman's condition worsened, a dark thought began to take form in Lucas's mind.

After the Battle at the Howling Plain, countless Orcs and Elves surrendered, the mad king gave order to execute all captives. Lucas cannot stand his father's actions no longer and killed his father with his twin swords. Lucas thus came to be known as“King Slayer”and“Father Slayer”.

As Freeman the 2nd, Lucas signed a peace contract with other nations. But only a month later, he was attacked and decapitated by rebels, becoming the Headless Horseman, left to wander the Earth for eternity...