The Angel's arrival to Sapphire from the 'Divine Planet' brought hope to the desperate Humans. The Angel Relic the“Divine Edge”turned the tide of battle. In 3 years, the Humans were once more on the offense. Faced with the Angel's might, the Abyssal Alliance crumbled.

After the defeat of the Abyssal Alliance, the question of what to do with the three leaders and the future of the Angels became priority. Angel Leader Bernice saw the World Tree on the horizon and had an idea. 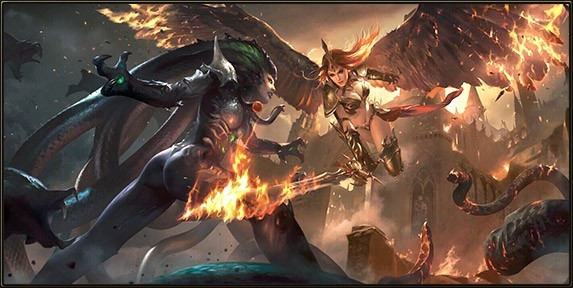 World Tree was the largest and most ancient tree on Sapphire, War had almost destroyed it. Berniced fused the Divine Flame from her homeworld into the heart of the tree and granted the tree ultimate protection and blessing. The withered tree came back to life, leaves spread to the sky and roots dug deep into the Earth with the Abyssal Leaders bound. The roots kept siphoning their powers, keeping them weak and turning their power into purified lifeforce. The World Tree became the source of magic for the Angels.

Humans once more ruled Sapphire, marginalizing the other races. The whole continent unified to form the“Divine Empire”and Angels were worshipped as gods. Angels spent a decade to form“Paramount”and made it their home. Bernice became the“Supreme Angel”.