The“Celestials”is a unique group that came to Sapphire with the Angels, with no special powers, they are intellectually superior.Their leader Adolf believed that they once had intellect as well as special powers. Their creator later took away their power because the Celestials were too perfect.

Adolf spent all his efforts in augmenting the Celestials. The fall of Tanya taught him one thing,that genes can mutate and powers can change.So using his position as Head of SEED, he used the Dark Lord as a study subject and even released Loki to assist him in the research that he named the“Soucecode Program”. 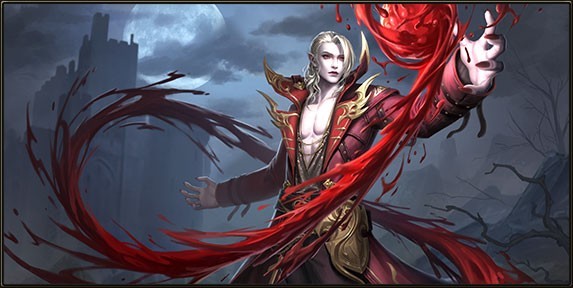 Somehow the servants of the Dark Lord got news and broke the seal, releasing their master! Adolf, eager to rectify his mistakes used a prototype potion he was researching. For a short period he gained incredible power, speed and vision. He gave out the potion in large numbers, creating an elite army to defeat the Dark Lord again.

After awhile, a terrible side effect surfaced——those who injected the potion began to attack those around them. The only thing that restores their sanity is if they consume blood. The Supreme Council dispatched Pandora to investigate. With the help of Loki, they made a“Source Serum”that can keep the side effect in check. Loki regained his freedom for his help.

Although with the help of the serum, the Celestials can control their mutation, their body were permanently affected. They became immortal with enhanced healing power, great strength and fast speed. Thye came to be known as the Bloods. Adolf became leader as“Blood Prince”at the price of serving the Angels forever.