Game of Thrones Winter is Coming is turning 1! We would like to thank all of our lords and ladies for your love and support! Without you, this journey would never have been so epic! Starting from March 10th, all players will be able to receive buffs from Seven’s Blessing while participating a series of anniversary events. Come and check them out!

Entrance: Click on “Major Events” icon in the main interface of the game.

Event Description: May the seven bless you. You will receive different buffs continuously during this period.

Not only double rewards from Weirwood Tree will be available, but also damage increase for Alliance Bosses and extra Diamons for Auction. Keep an eye on the buffs and obtain the most rewards possible!

Check out the buffs below: 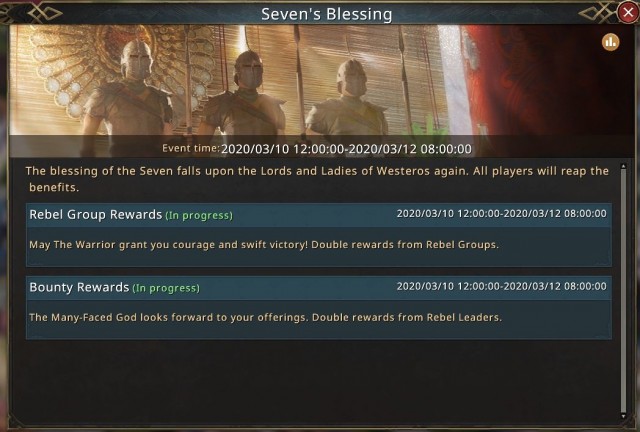 Event Description: Laughter or tears, we’ve been through a lot through the past year.

During the event, it will require all kingdoms together to unlock the four stages by donating Memory Pieces and discover stories from Rise of Empire to Expedition Sword and more, as well as obtaining various rewards.

Once the four stages are all unlocked, you’ll be able to open the “Time Capsule” in which you can write a letter to your future self 1 year from now, and check it out in your in-game mail in March 2021! 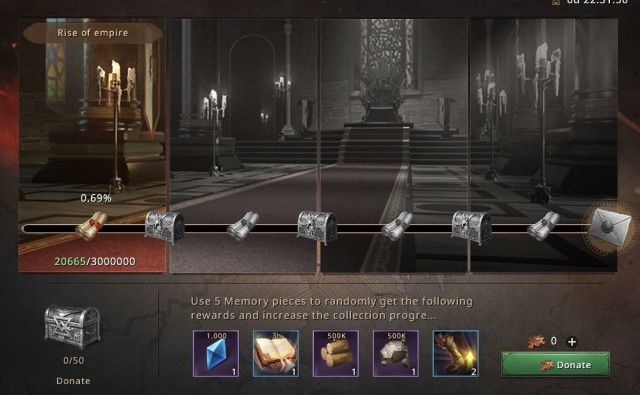 Event Description: Have you noticed any similarity between City of Adoration and the new castle exterior City of Prosperity?

During the event, you can obtain the City of Prosperity (7 day coupon) after recharge a certain amount of Black Diamond. Once owned, you’ll have an 8% increase in Total Defense and 10% in Spearman Attack and Calvary Attack respectively once activated. Don’t miss out! 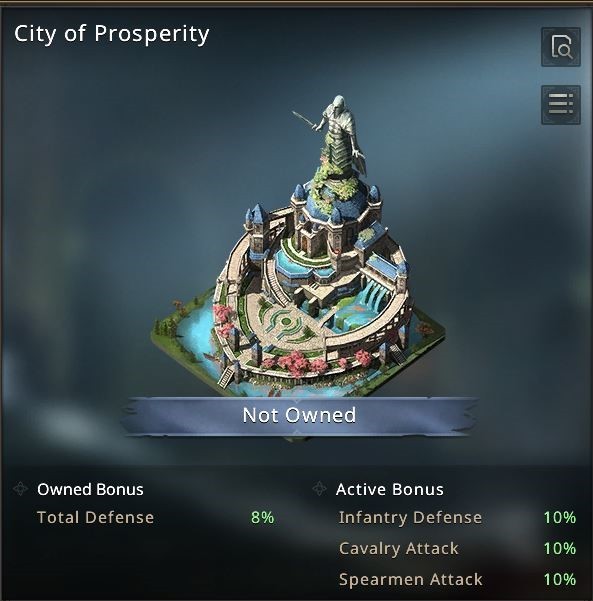 Event Description: A series of mysterious events will be available. It’s a good way to level up the commander loyalty, raise your second dragon and acquire Diamonds during the anniversary celebration.

You can use Big Treasury Key to DIY your own Raffle with mixed rewards from three pools where there will be 10 kinds of rewards available! If you are lucky enough, you might be able to get a special Ancient Dragon Skill for your dragon! You’ll also find special packs including (Legendary) Badge Chests, Friendship Chest and many other items. Don’t miss out!

In addition, starting from March 20, you’ll be able to collect FIREWORKS through daily activities in Westeros to light up the entire land! Also, a one-month-long event will be held for you and your old friends to return to Westeros. Stay tuned!

Don’t hesitate to join us in our anniversary party and enjoy the time with your friends!