Legacy of Discord introduces its coolest wing yet 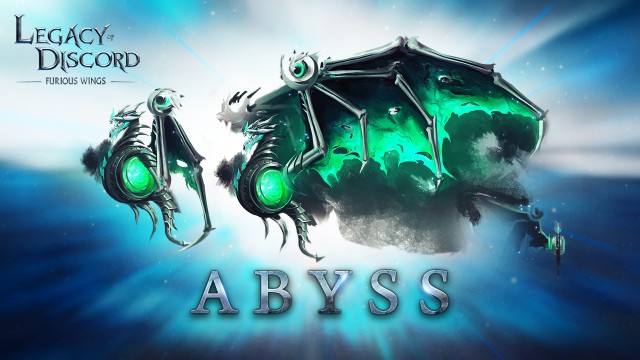 Abyss
The deepest depths of the sea, known as the Abyss, is a bottomless, pitch black region you only hear about in stories. Sailors often tell tales of horrifying creatures that dwell in the Abyss. They say at night, creatures would rise to the surface and snatch away unwary sailors from the decks of their ships. One survivor of such an attack recalls that the Abyssal horror he saw crawled onto the ship and had bat-like wings. Had he panicked and screamed, he would have been dragged overboard. But instead the veteran sailor snuck away and quietly alerted the rest of the crew. All 30 men aboard the ship armed themselves and took the monster by surprise. However this was no ordinary creature. The bat-like Abyssal horror was able to breathe ice that could instantly freeze a man. In the struggle, many men were caught by its breathe and frozen to death. The captain finally managed to severe one of the creature’s wings, causing it to flee back into the sea. The remaining crew came back to Celestial City with a story and a souvenir from the Abyss, which was crafted into the Wrathwing Abyss.

Hermes
When the darkness spread across Aurora, most human cities were instantly overran. The ones that did not fall immediately were isolated by enemy forces and completely cut off from outside communication. While many warriors took up arms to fight back the demonic hordes, others defended humanity in their own way. One such man fearlessly navigated through enemy lines to deliver crucial messages between the last remaining human cities. Instead of being blessed with strength, he was blessed with fleet of foot. He was so good at his task that the people gave him the nickname Hermes, after the cunning emissary of the gods. But one tragic day, Hermes failed to return from his mission. In his honor, the greatest smiths of Celestial City crafted a set of Wrathwings and named it after the valiant messenger.


Note: Resource Tycoon will only be available on older servers from Dec 1th to Dec 4th. New servers (those that opened within 15 days) will have to wait a bit before seeing the event.